The Meikyokai dojo was founded in January 2004 by Neil Saunders and Ian Moody.

Meikyokai means ‘when the mind is free and clear’ which is one of the principles of any martial art, this is often known as mushin or ‘no mind’. At the Meikyokai dojo, we are inspired to achieve this state by trusting the form to develop precise and powerful technique and relaxation through our technique. As a consequence, we aim to develop muscle memory so that our subconscious mind reacts to specific situations rather than our conscious mind.

All of the instructors are qualified and have full Personal Indemnity Insurance and are CRB checked. All members train in a friendly and sincere manner, creating an atmosphere of enjoyment and togetherness where we all have the common goal of improving our Aikido. At present, the dojo only caters for adults but anyone is welcome to watch a class or even try one.

All levels of ability are catered for, including beginners and advanced students. 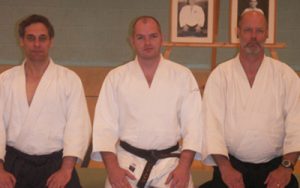 He was fortunate to meet and train with David Rubens (7th Dan Yoshinkan Aikido), and continues to this day to train with Rubens Sensei when possible. Rubens Sensei has had a profound effect on his Aikido and this can be seen today.

Through David, Neil met Robert Mustard (8th Dan Yoshinkan Aikido) and he has been able to train with Mustard Sensei on numerous occasions including several trips to his Dojo in Vancouver. Like Rubens Sensei, Mustard Sensei has had a profound effect on Neil’s Aikido.

In September 2017, Neil was awarded the rank of 6th Dan in Yoshinkan Aikido by Robert Mustard Shihan.

He is one of only the few people in the world to hold high ranks in both the Yoshinkan and Tomiki systems of Aikido. 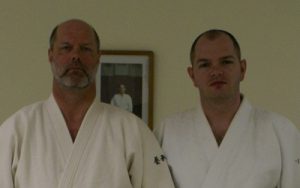 Robert Mustard Sensei began his Yoshinkan Aikido training under Takeshi Kimeda Sensei (9th Dan) over 30 years ago.  After achieving the level of sandan (3rd degree black belt), he left Toronto to continue his study at the Yoshinkan Aikido Honbu Dojo (headquarters) in Tokyo.

In 1987, Mustard completed the intense 9-month “Senshusei” training course which is mandatory training for the Tokyo Riot Police and Honbu Dojo instructors.  As a direct result of his determination and focus in this gruelling training, he was among the first foreigners ever to receive the award for best performance at the annual All-Japan Yoshinkan Demonstration.

For close to 10 years he trained as a student of Soke Gozo Shioda, founder of Yoshinkan Aikido, Takafumi Takeno Sensei, 9th Dan; and Tsutomu Chida Sensei, 8th Dan.  In 1991 Mustard Sensei was appointed Itaku Shidoin by Shioda Kancho and remained the Chief Foreign Instructor at the Yoshinkan Honbu Dojo until he moved back to Canada in 1995.

Today he is recognized worldwide as being among the very best Yoshinkan Aikido practitioners and instructors. When he isn’t conducting clinics at aikido dojos all over the world, or taking Uke and translating for the most senior Yoshinkan instructors in the world, like Shioda Kancho, Chida Sensei, Takeno Sensei and Nakano Sensei, he is instructing classes in his own dojo located in Burnaby, B.C. Canada.